The Red Heads - About Us

Once upon a time… there were The Red Heads! 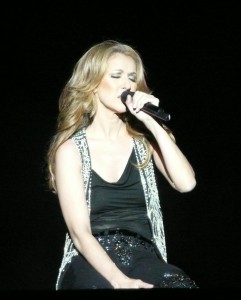 The story of some fans like no others who wanted to live their passion differently.

ORIGIN OF THE GROUP:

July 7th, 2008, Céline is in the middle of her Taking Chances Tour, travelling the world, show after show. From South Africa to Australia, from China to Europe, from Bercy to Arras… Yes Arras, this small town in the Northern France well known for its summer festivals. This charming lovely town which was welcoming to its Grand Plaza the Taking Chances World Tour…

Who would have guessed that on this particular day, the fans who were attending the show were going to see an extraordinary spectacle?

A few weeks before the concert, some fans decided to take advantage of this open air concert to offer Céline a gift from their heart. The plan was simple: get together, spread the word and get the people in the audience to bring as many red balloons as possible, to be distributed in the crowd and inflated during the song: My Love. Nothing exceptional up to this point, just another fan story… 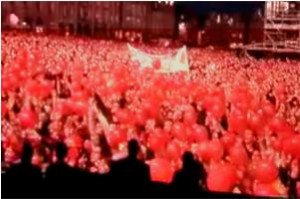 The wait seemed long, but the things came into place when the action was needed. On D-Day, while the surprise was unfolding, on the big screen behind Céline we realized that not ten, but thousands of balloons were scattered through the audience from the first to the last rows… Appearing like thousands of tiny red heads… Under the rain, the wind, fans exchanging satisfied and happy looks… We could hear the crowd roaring with pleasure while Céline, charmed, was undoubtedly delighted…

And suddenly, without any signaling, thousands of balloons started rising, crossing the crowd towards the stage and up in the sky. For a moment everyone breathless, their mesmerized eyes turned towards the sky. Soon, silence gave way to yells of joy, before this unique and enchanted spectacle.

The balloons invaded the stage, the musicians amused were kicking them around and Céline, smiling, was silently watching the show, lost in her thoughts. For a minute roles had switched, she was the spectator. And we were delighted. All around, inhabitants of the houses that were surrounding the Plaza were waving their arms to show their enthusiasm.

In the growing darkness, the red mingled with the pale lights of the street lamps, when Céline’s voice instantaneously restored the calm… My love, we have seen it all…

SINCE THAT DAY, THE RED COLOR HAS NEVER LEFT US…

Armed with the Red Heads Cap , you will recognize us thanks to the «Red» color, which symbolizes «the passion» that we have for our idol: Céline Dion!

Our approach differs from that of any other existing organization as we have chosen to prove our attachment to Céline while serving her interests to the core.

This team of fans is totally independent, aiming to organize events that contribute to the liveliness of the zeal surrounding Céline.

Would you like to join us? Would you like to surprise Céline?! Accompany her in the most important moments of her life and career and share our passion?! Come on board! We are waiting for you!

But to be part of The Red Heads, you first have to accept the following moral contract:

– You must love Céline and be willing to show her your love in a different and special way;

– Your sole objective is to serve her interests;

– You must behave impeccably towards other Red Heads: tolerance, openness, no matter which blog or forum or website they belong to;

– The qualities of the perfect Red Heads: open-minded, supportive, disciplined, responsive, and… FAN!